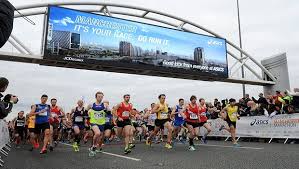 “Don’t arrive late” was the mantra running through my brain. Regular readers will know this has been an issue of late, so I crawled out of my bed good and early before setting off on the journey from St Helens, where I was staying with friends, down the M62. The morning had dawned misty and grey, but the motorways were thankfully empty. We sailed down the M6, over Thelwall viaduct without a hitch before turning up the M56 to Sale Water Park. Here, the park-and-ride facility found us queuing for a tram along with a smattering of other people wearing tracksuits, hoodies and running shoes. Swinton (Lancashire) and Pocklington (Yorkshire) running clubs were in evidence.

The tram was fast and efficient taking us to Trafford Bar, about half a mile from race HQ. As we walked down towards the athletes village with plenty of apprehensive-looking runners were joining the throng, a bit like the rats following the pied piper (is that a good analogy? Probably not). A goodly number of spectators were in the throng too. One told me she’d never done a marathon but had got a place in the Marathon du Medoc in September. Lucky lady.

With 75 minutes before the start I had time to check out two places of former pilgrimage from student days. The cricket ground had been re-developed out of all recognition. It was quite sobering to think that my last visit was now 35 years ago (Geoff Boycott scored 18, if anyone is interested). Down the other end of the Warwick Rd the self-styled ‘Theatre of Dreams’ a.k.a Old Trafford, home of Manchester United has also changed immensely since the 1980s, but then so has football.

Whilst queuing for the loos I spotted Sally so just time to exchange greetings and good luck wishes. And then it started to go pear shaped. My running belt fell apart (safety pins to the rescue), my arm-belt holding the energy chews was too loose (live with it), the queues for baggage drop off were twenty deep (but fortunately fast moving) and the arm bracelet given at baggage drop off wasn’t sticky (more pfaffing around putting that in the belt).

By this time it was ten to nine and the start was still at least half a mile away. What was that mantra again? Still, no real panic as loads of runners were still making their way to the start but I didn’t really want to rely on the ‘Allway’ © method of starting at the back as this would risk getting delayed behind people walking . The queue for the start was several hundred yards long and my allocated start pen was somewhere in the middle. Then the guy on the PA announced the race was starting, so I had no chance of getting far enough forward by the time we crossed the line.

As it happens, this really didn’t matter too much as feared logjam didn’t materialise and we were able to start running as soon as we crossed the line, despite the number of runners around us. The first curiosity within the first 200m was the number of guys (at least 20) who felt the need to race up the grassy embankment into the bushes to find relief. Why? Couldn’t they have gone before they started? Actually, the first few miles seemed to be punctuated by chaps nipping behind bushes – must have been the nerves.

Having spent 4 months training using heart rate as the yardstick as to how fast I should go, it quickly became clear this was useless. As soon as we crossed the line, it was 20 bpm higher than it should have been and refused to come down (Jerry had warned me this would happen – something to do with adrenalin and the big occasion). However, I was hardly breathing and felt fine so decided to forget heart rate, keep to a nice pace and enjoy the event.

First up was a quick loop around the residential streets of upper Chorlton  giving me the chance to re-visit a few more of my student haunts, which didn’t seem to have changed much. On returning to Old Trafford we turned towards Sale down the A56.

Sale was the 10k point, where we ran past somewhere I used to work (I have less good memories of that place though) before stopping at the water station. By this time I was alternating intake of glucose, energy blocks or water every couple of kilometres, having completely forgotten to do that in the first 3-4 miles.

We ran through Sale, past the local church choir who were performing for our benefit and then on through Brooklands towards Altrincham. The scenery was very south Manchester i.e. leafy suburbs with plenty of solid-looking, red-brick housing. All the way down there were people cheering us on with small kids high-fiving the runners (who were low-fiving in return). Going through Timperley was pretty amazing due to the level of noise being generated by the crowd. There was also a lorry with big speakers on blasting out the music, and a couple of 118 guys doing something too – they weren’t as good as Rich though.

Altrincham town centre was full of people too, all making plenty of noise. Coming out of Altrincham I heard a shout and turned to glimpse the green and white shirted Carl running in the opposite direction, just in front of the 4-hour pacer. Not long later I caught the 3:45 pacer, which was a good sign as he started a bit before me. At around 15 miles we went past Brooklands railway station and it was more noise, with spectators standing about 3 feet away and screaming encouragement in our ears. Mega! A bit later there was a chance for a quick natter with a Calne Smartt runner (Graham) who said he was enjoying it and going better than expected. In fact he was going a bit too well for me as I couldn’t hold his pace but hopefully I’ll catch up with him later in the season nearer home.

Now we were well into the fun zone (miles 17 onwards) where things start to get a bit harder. I was beginning to slow fractionally, but only about 5s per mile. I reached psychologically important 20 mile mark at 2:46, so could do 12 minute miles and still break the mystical 4 hour barrier. Surely I could manage that?

By 22 miles I was facing another dilemma. The pace had dropped slightly again but if I held it there I might just squeeze under 3:40, but it would be tight. Should I go for it or kick back and settle for a 3:45? Silly question really.

I can’t really remember much of the last 4 miles, apart from being re-overtaken by the 3:45 pacer and another massive roar as we re-joined the A56 in Stretford. Most of the time was spent frantically calculating whether I was still on track for 3:40. It’s amazing how hard it is to do the maths when you’re getting tired – I seemed to get a different answer every time I did it.

The last quarter of a mile was so good. A long straight run, feeling not too bad (I even re-overtook the 3:45 guy) and watching the big clock on the finish gantry knowing I was going to squeeze under 3:40.

Just over the line I stopped for a few seconds and leant against a barrier. When I went to move off I could hardly walk so I hobbled into the village (a.k.a. car park), collected a goody bag and my own bag and went off in search of the wife. Some guys were drinking beer at this point. Now, it’s not like me to turn down a pint but I really couldn’t face it so I grabbed a protein shake instead. After that it was a trip back with a tram full of happy runners, all tired but very satisfied.

The journey home gave an opportunity for reflection. The whole event had left a really positive lasting impression. Yes, the time was very pleasing but much more than that it was the total experience running with so many other people cheered on by so many spectators making so much noise. I spent the afternoon wondering which one to do next.