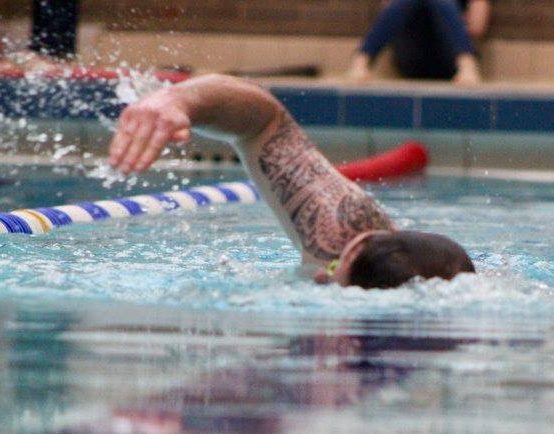 Our chairman, Nick has encouraged me to write the race review. It is more of a journey than a race review. Nonetheless, he was keen for me to share my experiences…..

With race day fast approaching I entered the pool on the 14th March for what should have been a great training session. It was dreadful, a mid-pool melt down turned into survival, and a battle to get to the end of the pool. It was my second length of a 600M main set. I had a great six length warm up prior to this and training had been going so well. I now felt like a complete beginner and my confidence was shot to pieces, near hyperventilation I spotted my coach in my peripheral vision, a surprise visit and not a timely one. With my heart rate going through the roof I was determined to show him a better effort and promptly kicked off…. The battle commenced and the water won again. After a short chat with my coach, a word with myself and some great swim analysis and advice from Fenella (who had just finished her own set). I cracked on and completed mine. I was happy to get it done but it was not good for the mental strength I was going to need to complete my first multi-sport event…. In two weeks!

I took this challenge on partly knowing I was about to turn 40 but mostly after enduring a six month on-off battle with shin splints throughout the summer/autumn of 2017. Prior to this I was enjoying the running culture, building strength and stamina and even entering my first league races for Shrewton Running Club. All this having only completed a C25K course in April of 2017. It was a huge disappointment for me to be off-roaded again when X-rays confirmed the worse – A Fractured Tibia! Another 8 weeks off! And my first DNS.

Determined not to give up I set about getting some swimming lessons to keep the fitness up. A few of the runners in the club suggested swimming could help and wouldn’t impact on the leg recovery. I have never been able to properly swim before and had only ever cuffed it when in the pool with mates as a teenager. I would certainly never put my head under water or go in the dark end (Deep) as I called it. As a child I near drowned in a lake in a boating accident and had a fear for water… I was facing my fears head on!

At swim school the coaches were amazing, so patient and full of praise. Quickly my lessons turned from widths to lengths, and before I knew it I had joined them in their Tri Club sessions. How that happened I don’t know, a weak moment perhaps or one of my “seems like a good idea” decisions. My swimming was improving quickly with their coaching and support and my leg had begun to heal. I was growing in confidence and self-belief. My return to running was planned with baby steps (a repeat of my C25K programme) after receiving the green light from medical staff. I was still so scared before every swim session, both at swim school and especially the first few Tri Club sessions. Even turning the car around to drive home before one session, having a word with myself and just getting on with it. Eventually I was confident enough to consider myself a swimmer and began sewing it all together.

Prior to my mid-pool melt down I had swam my first 1000M and had started to train for swim/run events. I was beginning to feel stronger with running and was enjoying running with Shrewton Running Club again. I had entered the Aquathlon as soon as it was advertised, as I needed a goal to focus on. I set this as a benchmark for training towards my first Triathlon in May 2018, which I entered at the same time. Everything was going so well and I didn’t need this blip two weeks prior to my first multi-sport event. However, I got back in the pool the following night with the Tri-Club and, with their help, I smashed that session. Now just a tapering week left, the training had begun mid-January and I had done as much as I could.

A lovely, low key British Triathlon event organised by STAR (Stonehenge triathlon and road) Starting in the pool at Durrington. A local event on the edge of Salisbury plain. I was in the first wave at 0930. I had never swam 500M before when I entered, and simply guessed how long I thought it would take and began training for it. Being in the first wave seemed to help with the pre-race nerves although when I got in the pool it seemed the world and its brother was watching me. All the other waves were in the viewing gallery, the changing rooms or poolside, or so it seemed. A huge noise of excitement and energy. The pressure was immense and I wanted to hide. In the pool there is nowhere to hide. Countdown and kick-off……..

I felt I swam twenty good lengths, although it certainly wasn’t easy. My technique appeared to hold out, although I was extremely nervous and took breaks at the end of lengths through sheer fear. My heart was pounding after each length and an ever increasing mental battle to continue grew and grew. My strategy here, was to stop and chat with anyone who would listen, much to the confusement and amusement of the officials and the despair of my coaches. Not great for quick times, but great if you are trying to survive. Finally! Into my last four lengths I began to relax but now I had burnt up adrenaline reserves on nervous energy alone. I remembered my coaches comments and got the job done, determined to enjoy this experience.

I had never done this before and certainly felt the chill of early mornings in March in just my swimming trunks. After an adrenaline fuelled explosion of talcum powder I quickly got my running shoes on, and a running top for an event I had to cancel when injured. A quick gulp of a drink and off to the plains. The cheer of the crowd was awesome! I was first out of the pool and first into transition. I would be first out on the run too, each pace leaving a trail of talcum powder.

The pool had near broken me, so much energy used up fighting nerves and fear. The drink I had in transition was quickly absorbed and I was feeding off the energy of the crowd alone. A quick sight of support from my wife Sue and huge cheers from the coaches, through gritted teeth, I was off on a race usual too fast pace, only to be slowed down by the kind of legs you see at the end of marathons. Fenella who was beginning her warm up routine passed me at this point and, as always, was so encouraging.

Through the playing fields, across the river Avon and out onto the plains. The route was advertised as a “fast” 5km run but that wasn’t happening today! After a quick mix of trails the road opened up to a cheeky hill to contend with and more than enough mud. The run was an out and back effort so all I needed to do was get up that hill and the rest of the event would be easy.

The relief of the halfway point and a view of the plains I had not ran on before pushed me down towards the finish. The camaraderie of passing people now on their way up the hill, cheers and laughs from those I had trained with, giving my coaches a few high fives as I passed, followed by a warm smile from Fran running her first multi-sport event for some time helped me find a new burst of energy and the finish line was quickly in sight. A roar of applause and cheers and I was first across the line, which in itself is a first. Although, in these events you are split into waves, slowest first. As a novice to this, my goal was none of the faster waves would catch me up! I was happy to take the tape so to speak.

As with any finish line there is a sense of achievement, the feeling of euphoria and of course the lure of cakes. However, this finish line represented so much more for me. The completion of a journey, a successful one and perhaps the opening for many more to come. I not only overcame injury to return to running, I smashed my return with a “Finishers” Aquathlete title and could proudly stand amongst the other finishers for photos. Fenella and Fran had great races, Fenella smashed the course record beating all the guys by some way with a speedy swim and a speedy run to take the podium. Fran, sporting a race skin wetsuit and of course flying the Shrewton colours, even had time for an “Alternative” finish route.

On reflection, a thoroughly enjoyable event where professionals rub shoulders with beginners and every level of athlete gets the same level of support. Particularly good for novices who wish to try their first multi-sport event, or seasoned athletes who want an early season blow out! I felt very welcome and now have a benchmark on which I can improve. I will be back next year but with the added confidence of knowing I CAN do this!