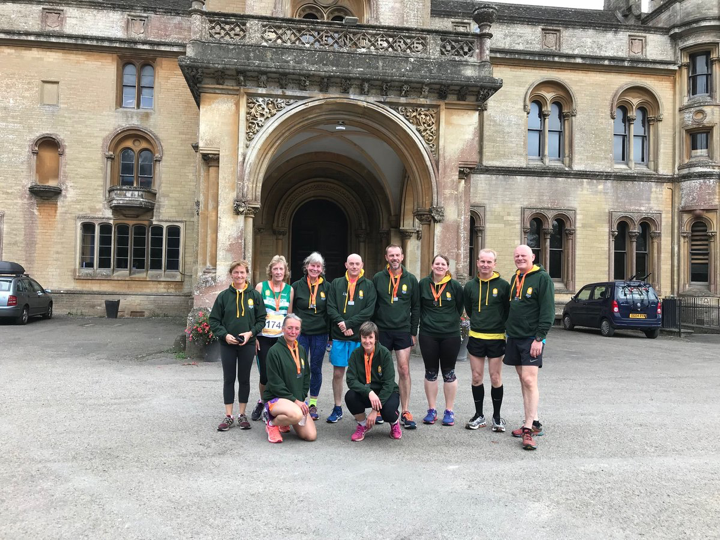 After an early morning rendezvous in the Rec car park, it was all aboard for a road trip to Grittleton, which is just north of the M4 for those who don’t know. I knew very little about the village, but the entrance was impressive as we pulled up and parked in front of Grittleton House. This was large and imposing, but perhaps a little austere and lacking charm for my taste. However, the village itself had charm by the bucket load, as long as Cotswold Stone is your thing. The organisers hadn’t gone so far as to close roads for the race, which was ok for most of it but it did seem a little unwise at the start line. About 15 minutes before the start, with competitors milling around in the road, a tractor came bombing down the road at a semi-ridiculous speed, which was a bit hairy. Over the next few minutes the road filled up and then 2 cars decided to go the other way, so everybody had to move to one side to let them through. The other entertainment was provided by a Salisbury AC runner who spotted Judy (who is on the committee at Salisbury) in a Shrewton vest and gave her some good-natured stick about it. Not sure why – she’s obviously a lady of good taste.

Eventually, we were ready for the off and the horn went. We trotted down through the village and then turned left outside the hall. The route wound down across the M4, ran parallel to it for half a mile and then back over the next bridge. At this point we were alongside Leigh Delamere Service station, but I have to admit I failed to notice it. Maybe it was behind a hedge.

The route was nice without being memorable (a bit like this race review really). Although mainly flat there was a slight incline at around 9 km. My main entertainment came in the last 2 km. I’d been slowly catching some chap ahead of me, and eventually edged ahead. At the next left hand bend, he shot up the inside and went a few yards ahead. No hassle – I just kept going at my steady pace and within a couple of hundred meters went by again. 100 meters later and he accelerates back past me, gets 5 meters in front and then slows down. Why???? Up the aforementioned incline at 9km my Shrewton training paid off and I was able to maintain the same pace, resulting in my going a few meters in front again. I thought this was the end of it, but no. He came fairly sprinting by, built up a lead of 20 meters or so and then slowed down again. It stayed like that until the finish, where he didn’t even bother with a sprint finish. I still can’t work out what he was doing – maybe he felt offended being overtaken by a bustard.

After finishing I turned to see Nick coming over the line close behind. Apparently he’d been close behind most of the way around. I then strolled back down the road to watch the rest of the team coming in. I got chatting to a very nice marshal who told me the race used to be for women only, up until a few years ago when it was opened up. I’m glad they did as it was a very nice event and I think everyone enjoyed it (including a healthy number of PBs), although one of our group did reveal himself to be a little bit of a trophy hunter.