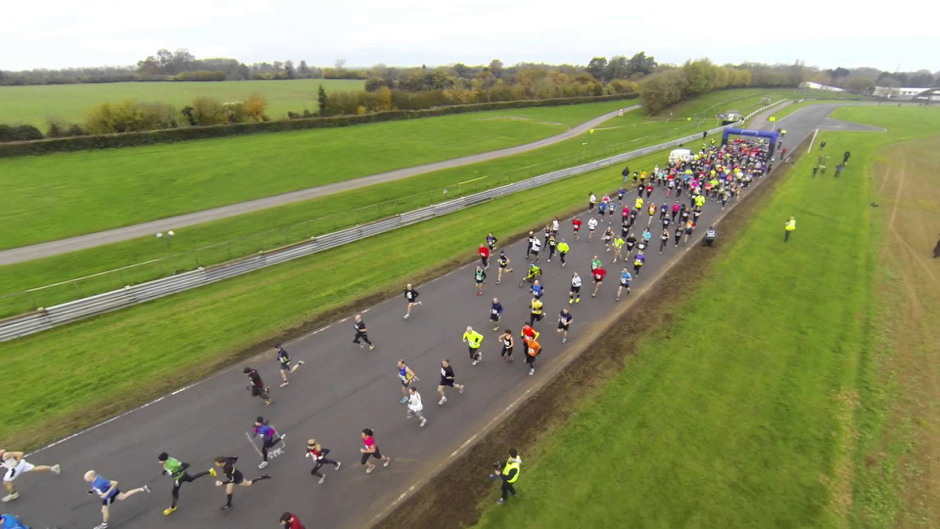 Castle Combe wasn’t really on my list until I sliced a good chunk off my PB at Calne, which breathed life back into an ambition I’d previously put on hold. Way back when (well, 1984 to be precise) I set a 10k PB of 44:59 running down and up the sea front at Blackpool. Since I re-started doing races in February I figured it would be super-cool to beat that, even though I wasn’t sure if it was going to be possible. After 8 months and 4 attempts my ‘vet50 PB’ had inched down from 49 to 48 minutes and I reluctantly filed the idea under ‘next year’. However, in October it suddenly became clear that Fran’s Wednesday night beastings were bringing dividends as over 2 minutes came off in a fortnight. Maybe it was just worth squeezing in a final push this year??

So I headed to Castle Combe, arriving an hour before race start. Well, that’s a slightly loose description as there was a queue to get in. For whatever reason it took ages to get in and then drive round to the parking area. By this time it was fifteen minutes before race start, I was miles away and still had to pick up my race number (Warning for those going next year: We had to produce id in order to get the number, so no turning up as Vicki!). I ran down to the start, arriving just in time to hear the announcement that the start had been delayed 15 minutes due to the queues. Grrr. Still, it gave me time for a quick chat with Carl who had turned up with his brother and dad and was running his first race as a club member.

Making my way to the start line, I saw they had people pace-making and I figured that hanging on to the coat tails of the 45-minute guy might achieve the desired end result. So I joined the cluster of people milling around him on the start line and waited for the lights to go green. Moments later the klaxon went and we were off, passing under a gantry at the start which had flames and smoke pouring out of the top – most impressive.

The first few hundred meters was from the paddock back up the pit-lane entry road, before joining the main circuit. The run down to the first corner was quite narrow and crowded, and I quickly found myself being overtaken by several runners who had obviously got better traction off the line. I just kept out of people’s way until we reached the end of the pit-lane, where there was a tight hairpin before we ventured out onto the track itself. I kept a wide line around the bend, only to find myself losing places to a few people who dived up the inside and did me under braking.

Once out on the track, I had a decision to make. The pace maker was already several yards ahead of me and it felt like we were going quite quickly. At the 1km marker my suspicions were confirmed as I went by 15 seconds ahead of schedule, leading me to ignore him and do my own thing.

After gaining access to the circuit, it was across the start/finish line followed by a right hander at Folly, going up the very slight Avon Rise incline before hitting the brakes and turning in to clip the apex at Quarry Corner. From there, we hit the accelerator down Farm Straight before taking a neat line through the left/right known as The Esses. Here it was important to straighten the line by clipping the red-and-white kerbs on each side, whilst making sure that at least one foot stayed on the track (no sense in being hauled before the stewards for exceeding track limits).

After Esses it was a sweeping right hander round Old Paddock Bend followed by the run down to the imaginatively named Tower Corner (there was an observation tower at the corner). After another chicane at Bobbies, it was full power down the Dean Straight before mincing our way around the final bend at Camp Corner, and then over the line to complete the lap.

This completed the first of 3 laps. By 5km I was beginning to catch backmarkers. The track was wide and there was plenty of room to get by without the need for blue flags. By this time I was miles behind the pace maker, but still 30 seconds up on target. I was also a bit shocked to see I’d set a PB for 5k and still had half the race to do. That said, I wasn’t feeling too bad so decided to keep the same pace going as long as I could. I even got a second wind at 7km but decided against accelerating, which was just as well as it soon disappeared and by the end I was glad to see the finish line…still 30 seconds under target. Yippeee. There’s life in us old(er) dogs yet.

This race is on the Wiltshire Road Race League twice in 2018; once in February and then again in October, so you can measure progress over the year. Is it worth doing? Well, obviously, as otherwise The Management will be having words about getting club points, but apart from that it appeals to 2 groups of runners. For beginners it’s great as it’s as near flat as you’re going to get, the surface is perfect, there’s no traffic and the road is wide, so you’ve plenty of space for doing your own thing. For speed merchants it’s perfect PB territory…for mostly the same reasons. However, if your style is more George and Mildred than Lewis Hamilton, then it may not appeal so much as doing three laps of a not very scenic flat field in Wiltshire can get a bit repetitive. That said, running round a race track has a certain novelty value, so maybe just do it the once?