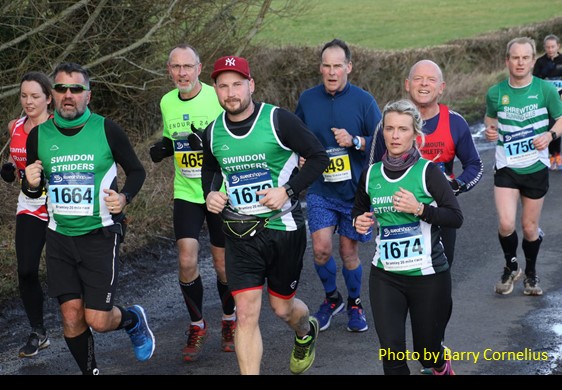 Rarely have I been to a race where I had so little idea in what sort of condition I was in. The last time I actually ‘raced’ was a park run back in early December, since when I’ve become a disciple of the heart rate zone method of training, where you spend a lot of time running much slower than you are capable of. As a broad generalisation, running at 70% of your maximum heart rate trains your muscles to burn fat, which we all have plenty of. Running above that means burning carbohydrates, which run out after a couple of hours. Above 85% and you start producing lactic acid, which makes your legs feel very tired.

Let my heart do the talking

So having spent a lot of the winter running at 70%, with a few shorter stretch sessions mixed in, it was a long time since I’d really pushed it. This race was meant to be preparation for the Manchester marathon 8 weeks hence, so I wanted to see where I was without giving it full beans (I’ve read somewhere you can only do one competitive marathon every 3 months). So what to do? In the end I decided to forget the pace and run on heart rate, trying to keep it between 75-80% (in my case around 150-155 beats per minute) and see where I ended up.

After a very windy night (the weather, not me!), the day dawned bright, breezy and cold. After an easy drive down the A303 and M3, I arrived at the car park in good time. However, the time soon became less good as the car park was a mile from the start and after covering half the distance I realised I’d forgotten my race chip, so had to retrace my steps. By the time I got back to the car I realised I was now late, so opted to get into race kit there, lock everything in the boot and jog down to the start. So, it was going to be 21 miles, not 20, then. After a thankfully fast queue for the loos, I arrived at the start at 10.29 ready for the 10.30 start. As the race started, I tagged onto the back of the group as it passed and we were off.

Many clubs, many people

The route was a 2-lap trip into the country, with 10 and 20 mile runners running together for the first lap. This made things a little crowded at the start, as we were running on pavements for the first half mile or so. Thankfully, we soon turned into a country lane, so for the first time I could relax and take stock. The first thing I noticed was the sheer variety of running clubs represented, over 130 in total from places far away like Devon, Kent and Newcastle, but no big groups from any one club.

The other thing I wanted to use the race for was practising taking on food at regular intervals. I had energy chews and 2 bottles of glucose drink and opted to take something on board every mile. It was too busy at mile one, so I started at mile 2, where I went for the drink from the waist belt. Unfortunately, I was just re-adjusting my top when I passed the cameraman….. This was also the point when I realised my legs were beginning to feel not quite as fresh as they should…..oh dear, just 18 to go. However, with the heart rate monitor showing 150-ish, all I could do was just keep the pace steady (around 9 minute miles).

The next 4-5 miles was a pleasant amble around country lanes in the sunshine, with the hedgerows shielding us from the wind, with very little of note to report. At mile 6 we reached the first of the 2 small inclines on the route. At around 300m long it was just enough to stretch the legs and bring the heart rate up a bit. However, the worst bit was that it took us to the top of a ridge, where we turned into a strong headwind for a mile. Ughh. Mile 8 brought the second hill, shorter but steeper, but still nothing to worry about. At 9 miles I got a bit of a surprise when the course ran alongside a section of road used earlier in the route. There were runners going past already on lap two, 3 miles ahead of us.

The heart is purring

The final mile of the first lap was marked by the 10-milers zooming past, encouraging each other with cries of ‘just a few yards to go’. Yeah, right. I was very pleased for them, but also happy myself as I’d got to half way, the heart rate was still under 155, the pace was still a shade under 9-minute miles, the legs were only slightly more tired than after 2 miles and things were going well.

Out onto the second lap where I found a few Swindon Striders to slipstream. It was so relaxing, I even had time for a snooze By 14 miles, it was clear that I was facing a dilemma. Cardiovascular drift was beginning (during a period of prolonged activity, the heart rate rises even though the effort remains the same) and I was now in the 155-160 zone. The average pace was still around 8:58, and I’d begun to think that 20 miles @ 9 minutes/mile would give a very nice neat 3-hour race time, which appealed to my inner anorak. I was loathe to let that go, and above all, I felt fine. I really wanted to run a bit faster, but remembering that headwind at mile 16 persuaded me just to keep the pace even. By the time I’d been up the slope and along the ridge against the headwind, the heart was now doing over 160 beats a minute (so getting close to the 85% threshold) but by then I only had 3 miles to go, so who cared?

And then I got a bit lucky. The average pace was showing as 8:59 by the time I got to the 19-mile marker, so I could do the last mile in 9 minutes and still have about 15-20 seconds in hand. Just to be sure, I switched the watch display to show the time and found it reading 2:51:20….I actually had 8m 40s to get to the finish. I wasn’t certain how that had happened, but whatever. It was time to forget heart rate, hit the accelerator and start overtaking people, reaching the finish with 50 seconds to spare…phew. Later analysis showed the course was in fact 20.09 miles long, which explained the anomaly, but also that I’d done the last mile in 7:45, which I was well chuffed with.

So what did I learn? I think I’m happy this heart rate thing works for me, as it kept me in check even when I was feeling good. I’ve never done 20 miles and felt that good, so maybe I need to think about if I can push a bit harder. I also need to find somewhere handy to store the energy sweets. I stuffed them into my sock this time, but obviously had to stop every time I wanted one, costing me 10-15 seconds each time. Maybe a wrist or arm band next time. Doing a 20-mile race was a really good experience, and this one was very good. As can be gathered from the review, it was pleasant rather than spectacular or eventful, but it attracted both a very good standard of runner and also quite a number of runners. I finished 437th out of 684, whereas normally I’d expect to be in the top 25% or so. The winners were in under 1hr 55 min, so less than 6-minute miles…sheeesh.

All in all, I came out of the race feeling much better than when I went into it, so job done.