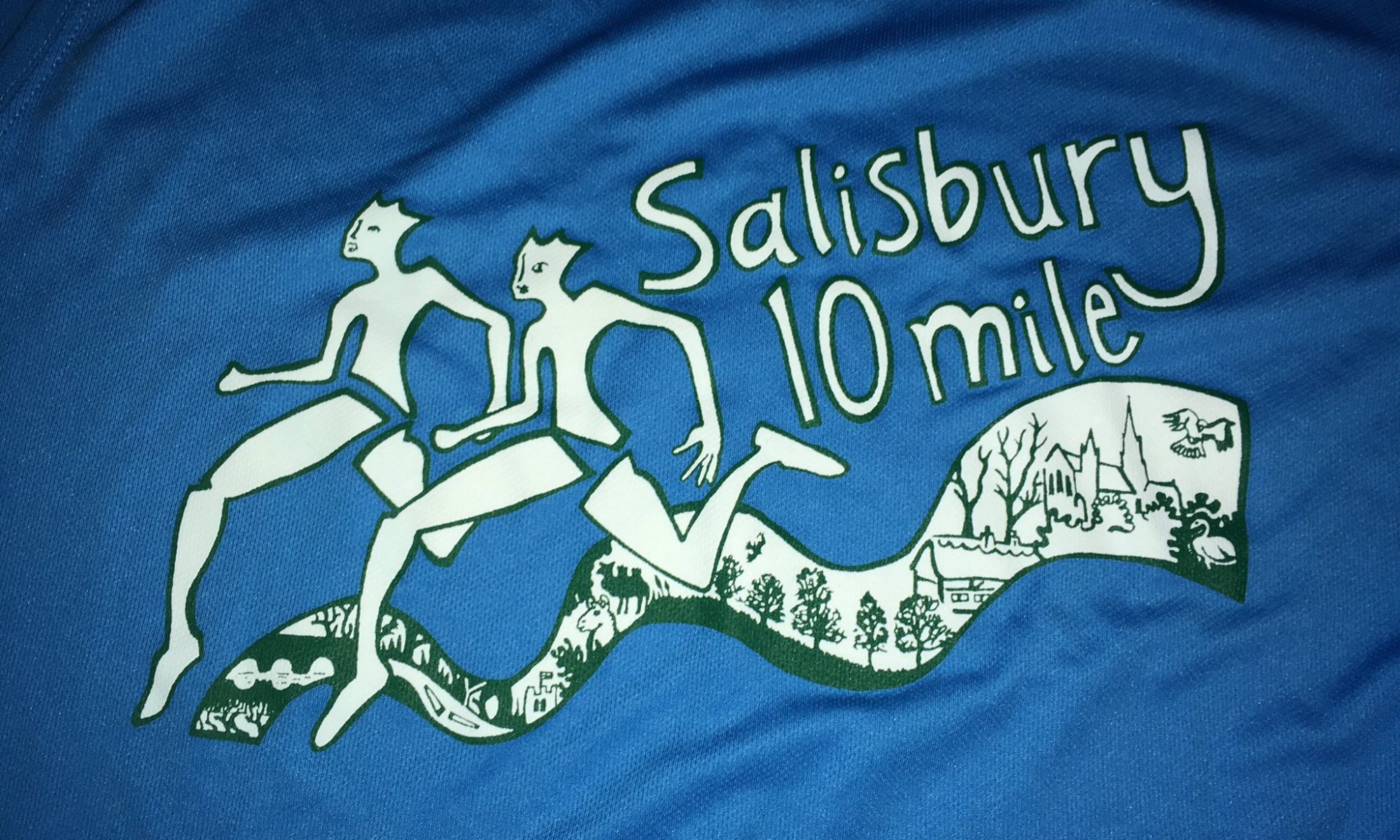 After eager anticipation Nick, Rich and Jerry headed off to the Salisbury 10 mile Race. It really could not have been a better Spring day; warm and sunny but Nick did make an observation that it might be just a bit too warm… You really cannot please everyone!

Arrival was smooth, with  well-organised parking in the field opposite the fire station. Race HQ was located in the Leisure Centre and again registration was smooth and well organised, but new to us was the requirement to register with photo ID, so there was no chance of us popping an elite runner into one of our places! Just for the record, we don’t do that sort of thing.

We picked up our T-shirts, which looked fab, well designed and therefore making it one to wear regularly. Nothing like the bright pink Bournemouth one!

We headed out to the running track, which was the start and finish location. We noted there was a lovely PA system this year which pumped out some great tunes to get us all going, so the three of us got into the spirit of it and did a few laps of the running track to warm up which seemed to be full of the elites. I think we all blended in with them and looked pretty awesome. If not we felt it!

Before long we were lined up ready for the start. Another point to note was that it was nice to be able to hear clearly the race directors briefing. So often at smaller races you find you cannot hear a thing so can miss important information. So we came to the 5-4-3 2-1 CLICK! Bugger!, 5-4-3-2-1 CLICK! Such a shame, but the starting gun would not fire so the race starter resorted to the tried and tested Old Skool method of 5-4-3-2-1 GO!! This worked a treat and off we went.

The race set off out of the City limits along Stratford Road, over the river Avon and out along the lower Woodford road. Now it was at this point that the agreed race strategy previously agreed amongst us fell apart. Jerry suggested a nice steady 9min mile pace for the first 5 miles, and then depending on how we were feeling to run the second half at 8min mile Pace. This would bring us in at a respectable finish time and we would all go home happy. Well it was a good plan had Nick stuck to it. As is often the case, temptation can get the better of people. Nick felt so good he decided to maintain 8min-ish mile pace from the start so off he ploughed.  Jerry being more sensible resisted. Rich unbeknown to us was struggling with a knee issue so sensibly eased off the pace.

At the 5 mile point the race crosses the river and heads back towards the City along the Upper Woodford road. At this point all was going well as it was largely a flat run with super fine weather, but shortly after the turn we hit what could be described as a ‘cheeky little hill’. Nothing horrendous, but a hill none the less. The race continued before we hit another slightly less ‘cheeky little hill’ around the 7 mile point, and it was just enough to tire the legs. The remaining run into the City on the final 2 miles was flat, and should have been straightforward but the sun was now burning down, and with a stiff headwind made the run in on the final mile actually very tough.

The closing stages of the race took us around the running track. A great atmosphere to finish a race, and made us all feel like proper athletes.

And so it was that the childish behaviour that Shrewton Running Club seems to be becoming well known for happened again. This time in the form of Jerry who unknown to Nick had been stalking him for a while after his race strategy seemed to pay off. Think hare and the tortoise. Jerry timed his finish to perfection taking Nick about 20 yards to the line passing him with a raging war cry. Child!!

Rich came in a short while later but still having enjoyed a great race.

We picked up our really well stocked goodie bags, water and lovely medal and headed off.

In summary this event was extremely well organised, efficient friendly marshalling, and a great route through superb countryside. We would thoroughly recommend this to anyone, but it might be worth getting entries in early for next year as it’s going from strength to strength.