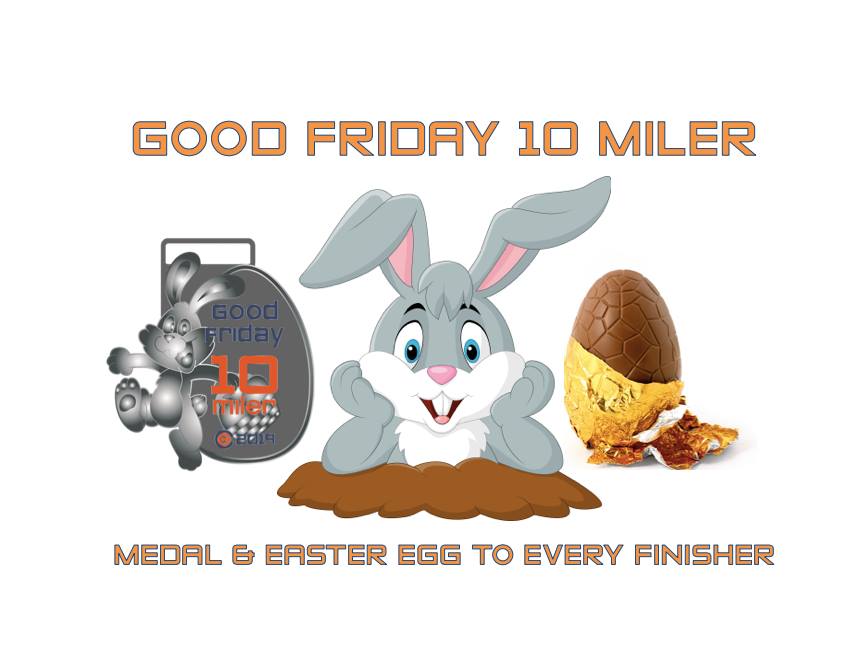 A sunny start to the Easter Weekend saw us being whisked effortlessly in Sally’s team limousine northwards to compete in the Chippenham Good Friday 10-miler.

The journey north was punctuated only by the American lady on google maps telling us to turn right, which we duly did, and then find ourselves driving down someone’s driveway. Once sorted, we arrived at the rugby club in plenty of time to observe the pre-race organisation and get tips for our very own Bustard 10k.

We met up with Chandy and Carl (the Legend) and also had the opportunity of a brief chat with Philip (the Legend’s dad) before making our way to the start line. It was a pleasantly sunny morning, with a cool breeze – perfect.

Having made my way to the back I was amiably nattering to the back markers when the siren went for the start. I switched on the watch only to find the GPS wasn’t finding a signal. I had to wait until it did – not a little embarrassing, but at least I made it to the start line video here.

For the second race in a row I’d shared the rear ranks with what I can only describe as a muppet by the name of Dougal who was dressed in a red kilt. Before anybody takes issue with the lack of respect being shown to a fellow competitor, checkout his twitter account here.  Looking at his race schedule here for the next few weeks, he just demands respect. Not only that, he ran the race in under two hours dressed in that lot in that heat. Just awesome.

At my previous race (the Wiltshire 10-miler in February) I was slightly surprised by how the body somehow knows what pace to run. I was also surprised because I’d expected to take about 90 minutes and ended up doing just under 83. I couldn’t really explain why I’d done so well, but after that I ran quite a lot of training miles in March and then took it easy in April so I figured I must be fitter than before and also well rested. Therefore 80 minutes was a reasonable target. This time I was telling the body what speed it was going. Simples………

2 miles in and things were going swimmingly. I was maintaining the pace with ease, felt good and I’d already overtaken all Shrewton runners except Tim, who was about 20 seconds ahead. He was going the same pace as me, so I just kept it steady until the first drinks station at 3.5 miles. Having slowed for drinks I then found I couldn’t pick up the pace. Tim was now disappearing into the distance and it was beginning to dawn on me this was not going to be a good day.

It wasn’t made that much better when we met the leader coming in the other direction, making it look very, very easy. He was already miles ahead of the next guy and went on to finish in about 50 minutes, which not only annihilated the course record but is probably the fastest guy I’ve raced with (loosely speaking of course) – just awesome.

The scenery was probably pleasant although obviously not spectacular as I didn’t really notice it. I didn’t notice very much to be honest, apart from how bad I was beginning to feel. By the time we got to the water stop the legs really were very heavy but kept going for another couple of miles, by which time I really was beginning to feel really quite bad. And this point I really began to question whether there was any value in pushing myself further. The decision was clinched when I considered the domestic situation where we were in the process of re-doing our lawn and were having a load of turf delivered the next day. I still had 4-5 hours of digging and levelling to do when I got back that afternoon in readiness, and it wouldn’t go down well if I arrived home in no fit state to do it. I figured I didn’t need to add ear-ache to what would undoubtedly be quite a lot of leg ache, so opted to stop running and start walking.

It wasn’t long before Carl appeared behind me looking relaxed and going well, hotly pursued by Charlotte (err, you know what mean) and only a few seconds back from them was Andrew. I did briefly think about trying to tag along, but thought better of it.

As I approached the rugby ground some chap came alongside and insisted I ran with him to the finish. The last 500m were downhill, so I managed to get the legs going again and trot to the line. Shortly afterwards, one of the chaps I’d been chatting to on the start line and who’d overtaken me close to the end came over and asked if I was ok. It’s really great to see such a nice spirit among the running community.

I guess when you have experiences like this it’s important to reflect on the negatives and the positives. On the negative side it was obviously disappointing my body wasn’t going to be told what speed it was going to run and I was also quite shocked when I realised this was my slowest ever road race. Against that, we all received a free Easter egg it was genuinely nice to be part of such a great team at such a nice event on such a nice day. The lawn looks nice too.