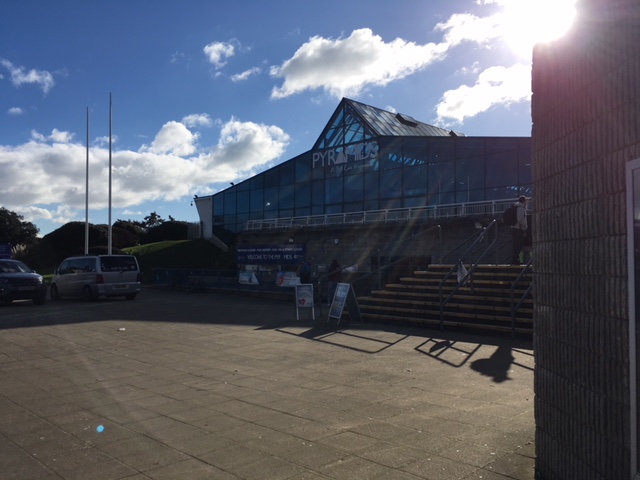 Portsmouth coastal half marathon, booked late last year was the first half marathon of the year for me. My alarm was set for 0545 and I was on the road an hour later for a 0730 registration at The Portsmouth Pyramid Centre where I collected my race bib, the main hall acting as a sort of holding area where all the runners could congregate, stay warm and have something to eat or drink prior to the 0930 start.

Along the sea front.

As the race start time approached, everyone gathered in the sunshine at the start for a communal warm up hosted by a chap that was obviously going to finish in a position much higher than me! Soon everyone counted down from ten and we started off up the slight incline for a 3 mile trek into a slight headwind along the promenade to the lifeboat station before doubling back on ourselves and veering off right through a couple of streets before arriving at the notorious (to the locals and previous entrants!) muddy beach.

The muddy beach is a 200 metre stretch around the estuary which at high tide has a reputation of eating running shoes but on this occasion, the tide was out and mine stayed relatively clean, although I still found it quite difficult underfoot. There was then another short jaunt along tarmac before going off road again along a dirt track before arriving at the first drinks station at mile 6 where water and jelly beans were handed out.

Up next was a stint along a busy main road and by now I was feeling quite comfortable with my pace, greatly assisted by the now tailwind. Soon after it was back to the muddy beach which was crossed for the second time in the opposite direction before seeing the 10 mile marker  and proceeding to run across the common and around several sports fields before arriving back at the Promenade.

The last 3 miles along the sea front back towards the Pyramids was quite enjoyable although it was made quite challenging by the number of people walking their dogs, playing with their children or just taking a stroll in the late morning sunshine; there were no lanes so plenty of weaving required! Soon, the 400 metres to go sign appeared and upon checking my watch I was going to finish with a PB, crossing the line in 1.54.

Medals were handed out as we queued for our goodie bags which contained a bottle of local real ale (a first!) although the elated finish was marred by a fellow runner passing out on the line and it seemed to take forever for a medic to get to him….hopefully he made a full recovery.

A well organised race around a very scenic place, I’d certainly return for a visit with the family. We were very lucky that the weather stayed nice as I’d imagine it could be horrendous in the wind and rain. The course was extremely flat and although challenging in places I would highly recommend it…..just make sure the weather’s nice!