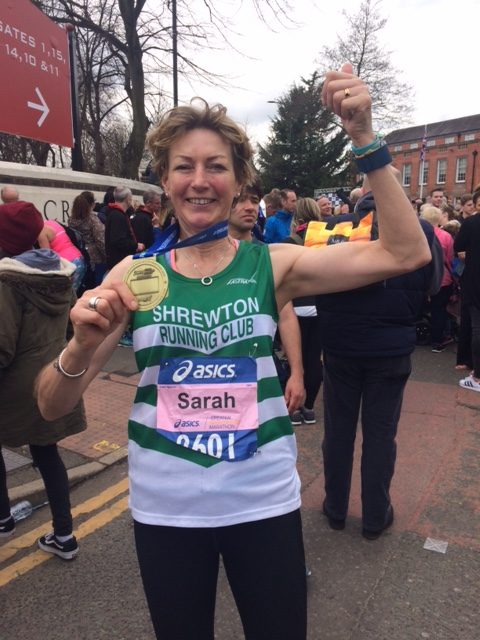 My daughter Flora signed both of us up to run the Manchester marathon way back in October as she wanted to do it with someone and I happened to be around at the right place with the right credit card. To be honest it was so far away I thought it easier to agree so didn’t give it that much thought.

However, by Christmas it dawned on me that I couldn’t ‘wing it’ unlike a 22 year old and thought that I had better start doing some training.  So I bullied Billy to set up a training program for me and because I knew that he would be keeping an eye on what training I had actually done, I pretty much kept to the plan, albeit at a slow pace.

A few days before the Manchester marathon, I popped round to see Andy A to collect some gels.

He wished me good luck & then told me to enjoy it! I did a double take but he was not joking.

My daughter cheerfully waved me off at the start as she had managed to damage some ligaments playing rugby a few weeks before.  Nick and Jerry had both told me to take it slowly at the start so I set off at my usual slow and steady pace and got chatting to people.  By mile three I suddenly spotted a familar Shrewton vest cruising past and managed to introduce myself to Carl before letting him pick up his pace and whizz off out of sight.  There were lots of peope keen to chat and it was brilliant to hear their stories, who they were running for, what they hoped to achieve and how they were going to do it. But what was really touching was the number of people cheering us on. Some just happily watched from their deckchairs but others were handing out jelly babies, fruit pastels and bannana cake – freshly made that morning apparently!  Hearing my name and being cheered on by the spectators was very encouraging but what made me really proud – and increase the effort – was when someone shouted “Come on Shrewton” – the pressure of representing such a top club!

In the last few miles I managed to overtake a unicorn – well I just had to – and decided with a fellow runner we crossed the finishing line that neither of us would be entering an ultra in the near future.

After consuming a particulary awful protein bar from the goody bag it was time to celebrate with a couple of cocktails at a very swanky bar with my daughter – but obviously I was allowed to pay!