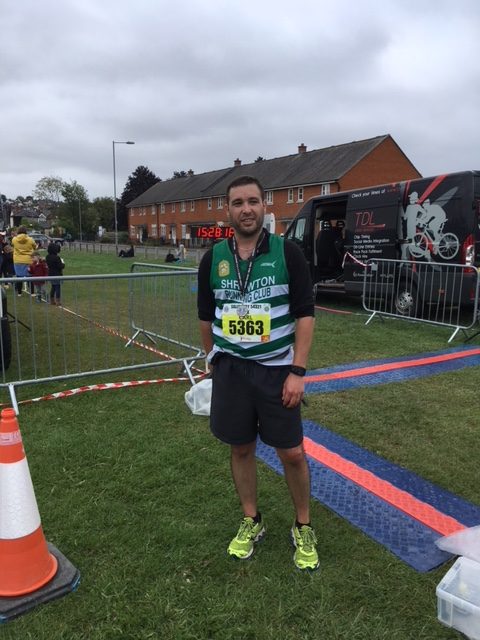 I awoke around 6.30 to the sound of the rain lashing against the bedroom window and quickly remembered that today was the day that I’d signed up to run the Salisbury 54321 50K (31 mile) Ultra race.

I believe the event is organised by the Salisbury Fire Service and athletes can choose from 5K, 10K, 21K, 33K, 42K and 50K distances, all starting off at various staggered times. There are also options for walkers. My initial thought was that I hope it’s cancelled, I really didn’t relish running across high ground whilst battling the wind and rain for half a day but soon come round to the idea that it could turn out to be fun…..

I arrived at Salisbury Fire station which served as the race village with changing rooms, toilets and a bag drop with an hour to spare and went through my pre-race rituals. It wasn’t long before I was huddled with the rest of the loonies and soon we were on our way running out along the river towards the Little Durnford, coming back to Old Sarum castle where we would complete a challenging 2/3 loop of the outer ring.

The route then headed out cross country towards Laverstock  and passing through the grounds of Clarendon Palace which I didn’t really know existed until recently….how could I not know about such a stunning place! At about 10 miles this was the first major check point where there was cake, fruit, sweets, juice and water. I decided to take a minute to compose myself and this was when I noticed that I’d been joined by the runners of the various other distances, including the walkers. This proved mentally challenging as by now I’d got myself into a steady pace but the temptation to change my game to keep up with the others was too appealing! I tried to keep to my game and pressed on.

Next, the course continued out towards Alderbury, through Nunton before continuing South West over the rolling hills of Wiltshire before returning North to Coombe Bissett. It was this part of the course that I found difficult, at times I found myself running completely alone which had me wondering whether I’d missed one of the many very well located signs, the wind & rain had picked up and I also got severe cramp in my right leg and at one point I didn’t actually think I’d make it down the hill. Luckily, I managed to run it off and it didn’t give me any more hassle until I’d finished!

22 miles and about 4 hours in, things suddenly began to get harder. My pace had slowed, my enthusiasm waned and my legs decided they’d had enough, is this what the wall feels like? I took a selfie for the club message board and the encouraging responses certainly helped me push on. Incidentally, this is the first time I’ve ever taken my phone on a run, another abnormality is that I don’t ever run with music anymore, even when training but today I made an exception. 9 miles to go and my run/walk had turned in to a walk/run!

Am I going the right way?

The next significant waypoint was Salisbury racecourse and then Wilton which I found mentally demoralising as I was running away from Salisbury and the finish line and the main thing that surprised me was the lack of Marshals and signage, there had been plenty of both until now and I got the feeling that they’d figured we didn’t need so much help now we were ‘in town’ and not out in the sticks. Again I found myself alone running down the street not sure if I was in the right place. I turned the corner to be greeted by another checkpoint and confirmation I was indeed going to right way! From here I ran along the A36 before turning off along Quidhampton, taking me along the river, eventually coming out on the A36 again at Harnham. I was now hurting and decided that I’m never going to do this distance again.

From Harnham the course took us down through the Salisbury cathedral grounds where I got chatting to a guy who confirmed he was half dead also. We run on through town and talked about our previous running exploits as I have him a guided tour of the sights and locations unfortunately made famous by the recent events in Salisbury.

The last half a mile followed the river back to the fire station and I’d never been so relieved to see the finish line was only a few yards away. Probably not my finest moment but I seem to remember challenging my new found running buddy to a sprint finish and feeling disappointed that he declined my offer.
I crossed the line with a chip time of 5 hours, 53 minutes and 35 seconds. Initially I’d wanted to finish within 5 and a half hours but given the terrain, I was made up that I’d come home in the time I did with an average pace of 11.10 minute/miles.

Typically, after completing a long run my legs ached quite badly and the usual remedy of an Epsom salts bath and a bottle of real ale aided their recovery whilst I re-ran the route in my head (this was just as painful, I’m never doing this distance again!)

This event was extremely well organised and thought out. It’s up to the individual to read the signs and I did see a couple of 33K runners scurrying back to the turn off that they’d missed and although I had a map that I’d studied beforehand, I was still caught out by how remote and undulated it was. Anyway, I’ve ticked an Ultra off the list so don’t have to do it again.

I’m gonna do this again next year!