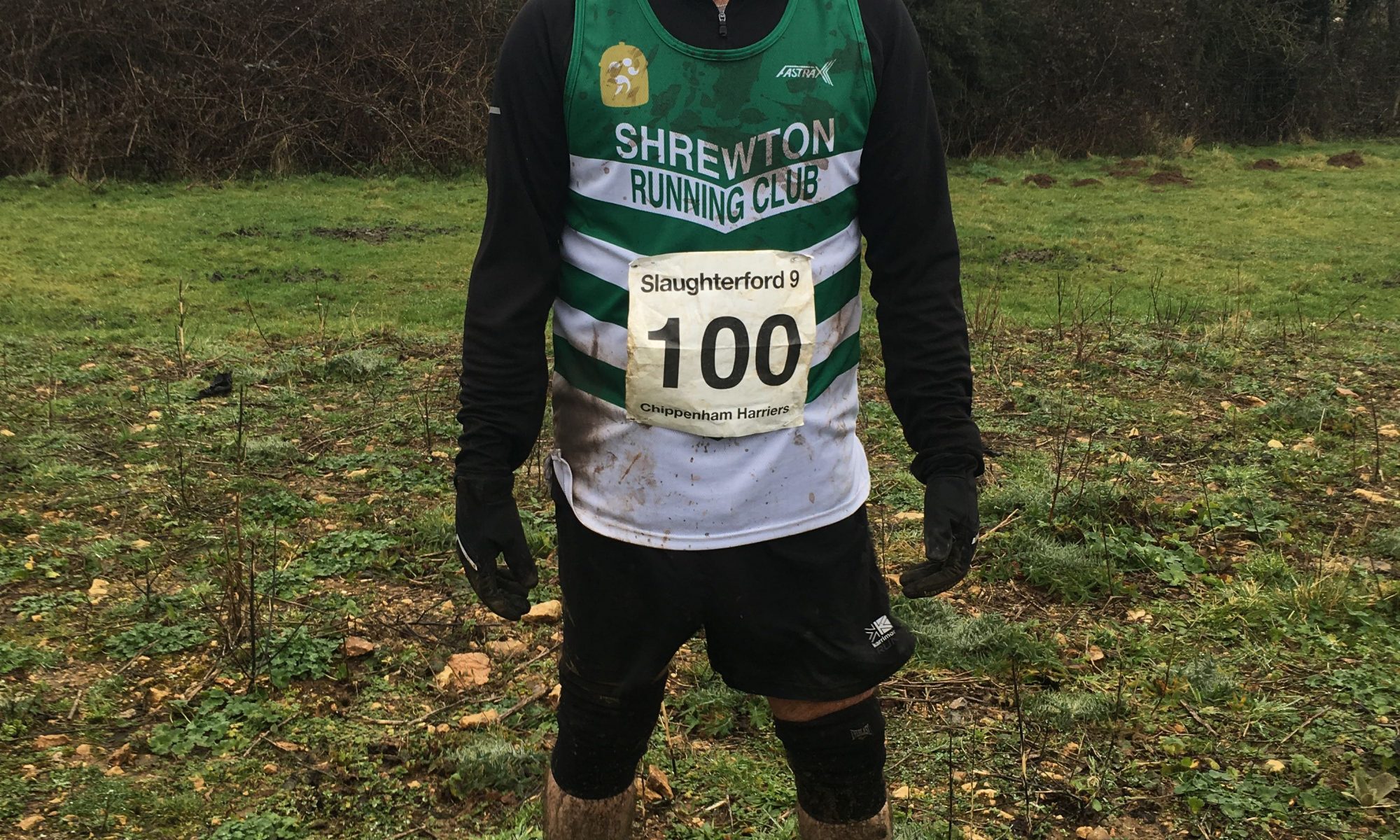 The first event of 2018 in my run calendar was Slaughterford 9, a nine mile (or more accurately 8.4 miles) Wiltshire Off Road League Race organised by the Chippenham Harriers Running Club starting and finishing at Leafy lane playing fields, close to MOD Corsham. I had been on the waiting list for a couple of weeks as the race become full very quickly, I got my email and signed up, not really having done my research of the route and terrain.

Do your research – if you dare!

A couple of days before the race I thought it a good idea to read some information and previous reviews to give me some idea of what to expect. I was in for a surprise, most of the race is cross country, quite literally! I bought myself some off-road running shoes and looked forward to my first outing wearing my new club running shirt!

Race day came around and on arriving at the venue, the weather being cold and drizzly meant quickly parking up and registering in the sports club. I was quite chuffed to have number 100 (the littlest things!) Race briefing was at 0930 and once completed, everyone jogged half a mile or so down to the start, across the busy A4 for a 1000 start.

What sounded like an air raid siren sounded and we were off, along the road, turned right and we were straight down a very steep stoney track which I was warned about by another runner beforehand, all I kept thinking at this point was just try not to turn an ankle. Some of the faster runners that started towards the back hurtled past but I resisted the temptation to speed up. At the bottom we were faced with the first hill which was more of a slight incline compared with what was to come!

Next we had to run along an undulated bridle way full of mud, puddles and more mud. I tried to dance around and not get too dirty early on, until I slipped and when hands first into a muddy puddle. Oh well, no point in trying to stay clean now!

Around mile 2.5 there was some congestion as everyone queues to get over a stile, secretly I was happy for a legitimate reason to stop and take a breather! Once over, we proceeded up a track which proved near impossible to walk up, let alone run. I guess there was 250 or so people had travelled up it before me so not surprising it was so slippery.

At 3 miles, at the bottom of a valley we found the first drink station, followed by the first big steep hill, once again progress was slow! The rest of the route led us along tracks and through muddy fields (some over ankle deep in wet mud) and through beautiful scenery and at one point I remember running along in a river for 30 metres or so!

Another hill (get the idea?)

The second drink stop came about at 6 miles and it was a nice touch that half oranges were handed out as well as shouts of encouragement. Soon, the second big hill appeared across the valley which demoralised me somewhat seeing the ants a mile in front already climbing it. Half way up the hill I got chatting to a another runner who said this was nothing compared to the last hill….he wasn’t joking! With less than a mile to go from the finish, a few of us looked skywards and laughed amongst ourselves (it’s described as the sting in the tail which is quite apt!) Once at the top we were given words of encouragement and told it was just along the track, up the hill and round the corner where my race began 1 hour 37 minutes earlier.

Slaughterford 9 is, I think is the most challenging race I have undertaken so far (previously being Frome 1/2 Marathon last year) however it’s certainly to date, the one I’ve enjoyed the most. It was well supported, very well marshalled, everyone looked out for each other and there was lots of banter and laughter despite the poor weather.

The bright yellow T-shirt is a nice addition to the running armoury, although if I’m honest I was a little disappointed there wasn’t a medal to show for my efforts. That said, the experience was far more important and I was proud to wear the club colours, even though it took me 45 minutes to wash the mud out of them!

Although I finished way down the order I was just happy to finish injury free and I’d certainly consider doing this race again next year, it was great fun!