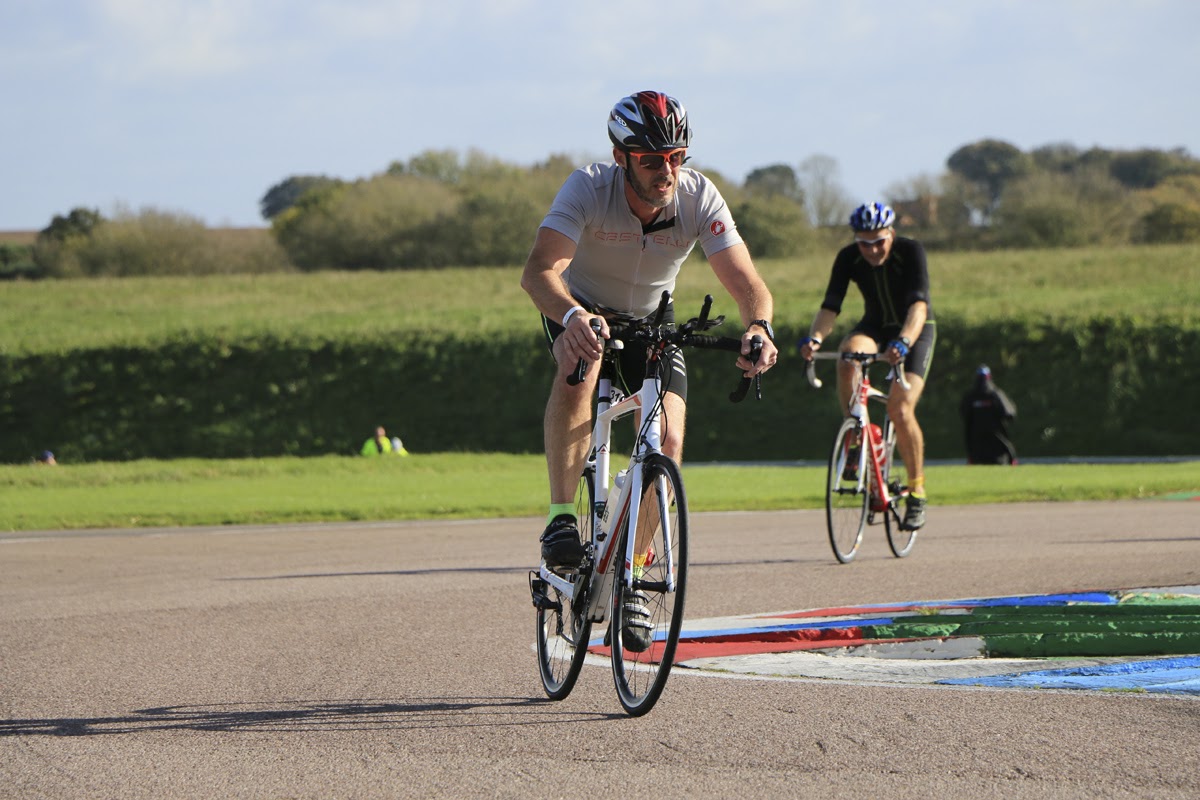 Having spent the last 5 years endlessly plugging away at running, I rather fancied the idea of getting back into cycling to compliment my training, and just needed something to get me going. Triathlon was a thought, but I knew I would have to work hard to get my swimming up to a decent standard, so I opted for a Duathon (run/bike/run).

In August, together with Ian, another club member, I entered the Thruxton Mass Attack duathlon, which was on 22nd Oct. This event seemed perfect, as it was local and the novelty of racing around Thruxton circuit added to the appeal. Rather than taking on the standard distance, I thought that as this was my first it would be more sensible to take on the Sprint distance. This was 1 lap run (3.8km) – 5 laps bike (19km) – 1 lap run (3.8km).

Having entered I thought about a training plan. Here I stumbled on my first problem. Having got very carried away entering many running races during the summer in a whole variety of distances 5k’s, 10k’s, 2 x half marathons I stumbled on the issue of what to focus on. In the October alone I had races every weekend including a half marathon a week before the Duathlon. This certainly was not a good move on my part, as I really should have aimed my training at a specific challenge. So it was all over the place from the start.

Next came the dilemma of what bike I should use. I have a mountain bike and a hybrid, but I had always thought about getting a road bike. So I hit good old Ebay, and after some searching found a fabulous full carbon Fuji road bike. The trip to Oxford was well worth it as it was perfect, in excellent condition, and if I couldn’t do it on this bike then I may as well give up.

Problem number two arrived too soon. Ian got his training under way before me and headed out on his first ride. This was Ian’s first ride out using clip-in shoes. Yes you guessed it… as predicted Ian came to a stop at a road junction, and could not get his foot out in time before he fell. Sadly he fell onto an extended arm breaking it cleanly in three places.

So now I had the bike, I had the motivation, and off I went on my first ride. I planned a little ‘out and back’ to Larkhill to get a feel for the bike. Things went reasonably well, but bike technology has moved on quite a bit since the good old days of gear shifts on the down tube, and centre pull brakes. Riding this bike was rather like trying to handle a Ferrari when you are only used to driving a ford fiesta. Things went reasonably well until I travelled over a terrible road surface and bang!! Punctured tyre…Bugger!! With no spare tube on board I had to ring home and get my wife pick me up. Humiliating to say the least.

With tyre fixed and more of a sense of urgency to get some proper training underway, I headed out on my next ride on 4th Sept on a 13mile loop via Chitterne and Tilshead. Whilst these are busy A roads they give a good road surface with decent hills to build strength. This first ride went reasonably well, although it was clear I had to do a lot of work as I found it very tough indeed keeping a decent pace. I also got numerous leg cramps, which were debilitating. I returned home a bit sore and dejected. How am I going to do this when I also have to add the run elements?

I wasn’t able to get out next on the bike until 20th Sept. I did the same route as I wanted to use this as my default circuit to enable to me measure my progress in time. Despite it being only my second ride it already felt better, my gear changes were a little more slick having worked out the gear system, and cramps were not so evident. I felt I was able to maintain a more efficient cadence. Still lots of work to be done though.

On 24th Sept I planned to go out on a run, but decided to get the bike prepared and end the run with a ride. I did my 8 mile run and had planned a nice smooth transition, however I soon realised this was a far more difficult than I imagined. What became evident is that your fine motor skills are shot while you are trying to bring yourself down after a long run. A simple task of swapping out of run shoes into cycle shoes becomes all fingers and thumbs, made worse by the sense of urgency. Eventually I got sorted and off on the bike for an 8 mile route. Again the ride felt better than the last one so I felt small steps were being made.

A couple of days later I tried a session with a bike/run. I did my usual bike loop which again felt fine, into a run. Again work needed on transition as it was shockingly slow, but as I set off on my run I leant the biggest lesson on why this discipline is so challenging. Running after a bike is unbelievably hard. Your legs feel like jelly, and your body is trying to work out what the hell you are doing. Within 100 meters I got leg cramps and was forced to stop and stretch off. I eventually got going again, but it took some time to really get into the run after the shock to the system. Man this is hard!!

On my next session I managed to bring all three elements together as I knew time was running out and I needed to get as many sessions as I could doing the distance. The first of these sessions slowed my running pace in order to concentrate on just getting the transitions slick, and getting my body used to the system. This worked well for me as my run after bike felt so much better than last time. Still a weird feeling, but better.

Sadly I only managed two more training sessions before the big day. Nowhere near enough to really make a decent time, but it was my first race and I had no benchmark so I just thought I would get through it and hopefully enjoy it.

So I arrived at race day. I travelled with Rich, another club member who had fortunately agreed to take Ian’s place and on his bike. Rich and I had planned to train together on this venture, but we only managed to achieve this on one occasion. Rich was far more relaxed about the whole affair than me which I wish I could have been more like.

We arrived at Thruxton to incredible winds care of hurricane Brian. It really was going to be a challenge. We registered, did our pre-race prep and took our bikes to the transition area. I racked my bike laid out my shoes and helmet and took a step back to mentally visualise where my bike was, as I needed to know where to head when coming into T1. So we headed out to the start line. The standard distance competitors set off first, before the sprint. Our time came and off we went. I eased steadily into the run but knew I should be aiming for my 5k pace or better really. Things felt good and I increased my pace until lap one was done and in I came to T1.

I located my bike and like lightning ejected my shoes thanks to the kind gift of a pair of elastic laces from Fenella Langridge (the biz!).  On with the helmet and running shoes and out I went back onto the track. Boom!! 55seconds!!

Now on the bike, the first half of the circuit was blessed with a superb tail wind care of ‘Brian’ that really felt like someone was pushing you. I took on some water and dug in easing down onto the tri bars. Things felt great until we turned a corner halfway around the track and into the enormous headwind. Now the pain started. It was a real dig in effort around the final part of the circuit to finish a lap, with what I can only describe as a ‘cheeky’ hill on the final bend. Not what I was expecting.

After my 5 laps were done in I came to T2. A slight confusion arose when I should dismount as a marshal was instructing us off before the ‘Bike off’ line. I dismounted as instructed only to see others cycle pass me and then get off at the line. In I went and made anther smooth transition, but sadly not as quick as my first.

Out of transition I set off on the final run. It didn’t take long to get my legs this time and felt good. As it was only one lap I dug in and pushed hard. Again the final part of the track was a killer, but I came in to finish time of 01:19:02.

In summary I loved every minute of the experience. I totally got the bug and can’t wait to do my next one. The whole experience has given me a huge respect for triathletes, as their sport is not for the faint hearted. It requires enormous dedication and effort in training across multi sport disciplines, and putting those elements together in one race is exceptionally demanding. At my level though I can just have fun with it, but of course I now have a time, which will need to be beaten.