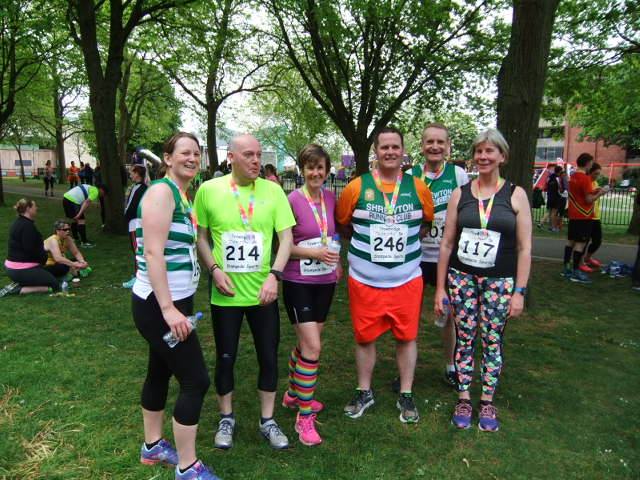 After a successful and enjoyable 8 week couch to 5K training programme I caught the “Running bug” with Shrewton Running Club. The sense of achievement was addictive and I wanted more. I signed up for the Trowbridge “Colourific 5K” and the reality of having entered my first Wiltshire league race as a newly registered athlete was quickly setting in.

The build up to the event was great. A mix of banter and gentle nerves during training sessions and social media encouraged a brilliant team spirit on the day.

The drive to the event was overcast and cool although the forecast was mixed. Andy H gladly accepted the role “IC Navigation” and, despite us boring Roxy and Helen with aeroplane talk Andy successfully got us to a car park, a short walk from race HQ where we met Jerry and Jane B. Having established that the Race HQ was in a pub made leaving it all the more difficult. None the less we registered, got the team colours on, got our numbers and left for the start line.

The start line was full of all sorts of bright and colourful outfits. Plenty of Tutus, a guy with full body paint, my infamous shorts and Jane B sporting a new pair of leggings.

I kept myself to the rear of the pack at the line, I wanted to run my own race and not be pulled along with the others. I wasn’t worried about my finish time. As my first event it was always going to be a PB.

As my first event I wanted to remember as much as possible. Sadly, I guess I was so focussed that the route went by as a blur. As much as I remember the route was a mix of park, road, hills and flats. I remember the hills more than the flats and particularly remember a hill around the 4k mark. I also remember some very enthusiastic marshals and plenty of other runners encouraging me as we ran. The lasting memory being “You’re doing great Shrewton” At the time I was not doing great and got a massive boost which took me in sight of the finish line. At the finish line a further boost was warmly welcomed as fellow Team Shrewton runners that had finished before me aligned the finish roaring the rest of us on. We all finished the event with PB’s (Mine was indeed quicker than any other 5k distance I had run) and gathered for a team photo.

A thoroughly enjoyable experience which has set a benchmark on which I can improve. I would love to run the event next year and would recommend it for those just starting out (Me) as well as those looking for a quick time. Some people really were quick.