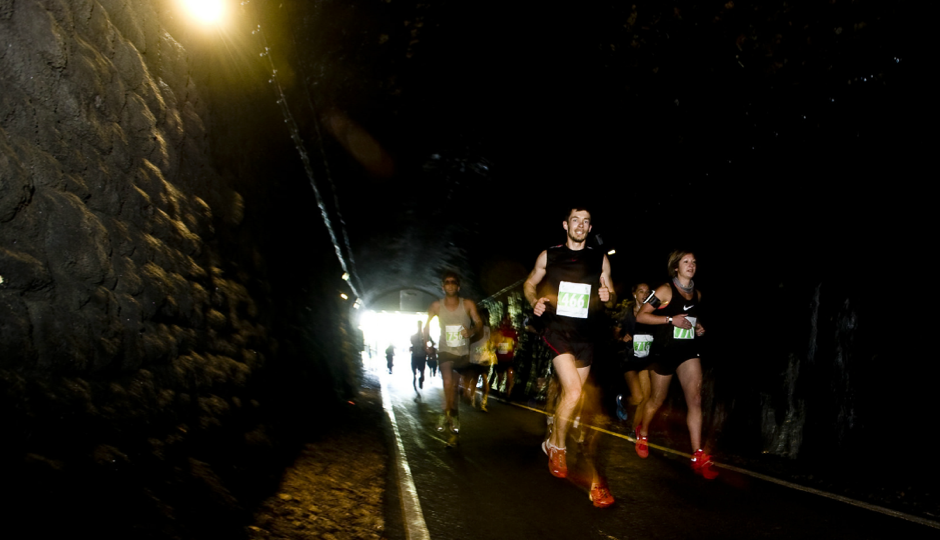 And so it was back to Bath for the second leg of the Bath Challenge, a series of three races of varying distances, routes and gradient profiles spread across 4 weekends throughout the year. This time it was the half marathon, and I opted for the “Return Ticket” option, which was the flat one through the tunnels. The hilly variety went through the tunnels one way and then back over the top the other – too much like hard work, even for someone who runs round Shrewton.

In what is becoming a pre-race ritual, I had checked out that Andrew from Avon Valley Runners had entered (see Corsham report) so started scanning the field for green and gold vests, but there was only one in sight during the whole day. It occurred that maybe Andrew was wearing a normal top, so started checking every male runner who looked likely. I didn’t find him and according to post race results, it seems he hadn’t entered again. Hopefully he’s ok.

Again, they’d very kindly issued me with a number which perfectly matched my running vest (Shrewton Racing Green) so I was colour co-ordinated again. The build-up was the same as before, but I skipped the organised warm-up this time as last time it made me feel lousy. Star jumps are obviously not my thing. And then it was a case of lining up at the back of the pack, waiting for the whistle and then heading off across the field and down onto the railway. The route was down through the 2 tunnels on the 10k route with the half marathon doing an extra 250m before turning around and heading back to the start. We then did the same loop again to complete the race distance. The first circuit was relatively smooth, and 10 ‘cool points’ to the guy who managed to take a photo as he was approaching the exit of one tunnel without stopping running. On the second circuit I started to notice that the track-bed wasn’t quite as flat as I’d first thought, with my tiring legs noticing the gentle undulations slightly more. Again, the lack of marker boards for some of the kilometres was a bit of a hassle when judging pace, but I think that’s because they would have to place them in the tunnels where it’s a bit narrow and a bit dark.

Obviously, the organisation and race was very similar to the 10k in February. I would have to admit that I just love those tunnels, even if the scenery isn’t great. I’m not sure how it works, but you seem to be running downhill in both directions. The website says that the tunnel entrances are at different heights, so you get a cooling breeze flowing through it. Certainly, the downhill gradient is really noticeable on the out leg, but not at all on the return, maybe because the breeze is with us. Whatever, it was a great way to run.

Another feature is the way they stagger the starts of all the race distances, so I spent much of the second lap catching and overtaking runners from a 10k that had only just started, which helped keep things moving along.

One other really nice touch is one of the marshals had a list of runners on a clipboard. As I approached he looked my number up and then said something like “Well done, Andy. Keep going”. I’d seen this happen in Feb (it may well have been the same guy) and it’s a really nice touch. Well done to him.

As said before, I can recommend this course for anyone wanting a go at a first 10k. There are lots of waves, so it’s easy to find a group with the right pace. It’s more or less flat and the out-and-back nature means you know what to expect for the second half of the race.

For me this race was a bit of learning curve. Whilst the race itself was very controlled and went as expected, the training was the opposite for 2 reasons. Firstly finding time to fit longer runs in during the week wasn’t always easy. Also, after a longer runs I was really stiff for 3 to 4 days, which limited how often I could run (although, this situation does seem to be getting better as I do more). The combination of these meant I didn’t do half as much training as I wanted to, and also meant I decided to miss the Devizes Half in April simply because I was nowhere near ready. If anyone else is contemplating their first half marathon, maybe it would be wise to take this into account when planning.

Age is just a number

To finish on a positive note, this was my first half marathon since I was 20 and my time was within 30 seconds of my first ever (1hr 45m), so it proves getting old doesn’t necessarily mean your performance drops off (insert the smutty innuendo of your choice here).