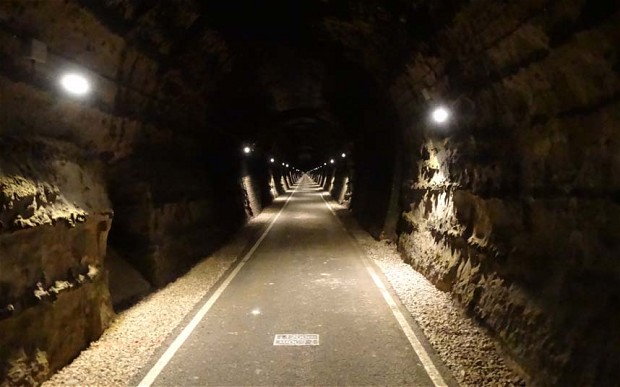 It was with a little nervousness that I approached this race, not so much because of the run itself, but mainly because it was over 3 decades since I’d done an organized run and I wasn’t really sure what to expect. On paper the race itself looked like an easy re-introduction. Following the route of the old Somerset and Dorset Railway, it headed out of Bath through 2 former railway tunnels for 5k, before turning and re-tracing its steps for the return journey. Apart from being a bit different, being an ex-railway line meant it was flat…wonderful.

There was no parking near the start, but the organizers had laid on a bus service from Odd Down park-and-ride a few miles away. This proved easy to find, and I arrived just after 9.00. Despite having just missed one bus, I was at the start by 9.45, ready for a 10.20 start (the buses seemed to run on the half hour). The start was a playing field in a housing estate, with a number of tents and portaloos (not enough – there was a 15 minute queue). Around 700 runners had turned up, running either 5k or 10k, split into waves starting at 10 minute intervals. I collected my race number for wave 3, which had a green background. Fortuitously, the green was exactly the same shade of green as my Shrewton Running Club vest and being colour-co-ordinated is just sooooo important when it comes to setting a good time…….errr,maybe.

5 minutes before the race a fitness instructor took us through a warm-up (the weather was grey and overcast with a chilly breeze) and then we lined up for the start. All ages and level of fitness were well represented and I went for my usual tactic of going to the back where I was a little surprised to be stood next to a young lady pushing her baby in a pushchair.

The race started with a 5-4-3-2-1-whistle start (no chip timing) and we headed off across the field and through a gap in the fence, before walking down a short muddy slope in single file where we joined the path. We then headed across the bridge on a nice tarmac surface and headed off.  It was at this point that my tactic of starting at the back began to look like a bad move, as the path was a bit narrow and we were meeting runners from a previous wave as they returned. We’d been told to keep left and overtake on the right, so it was a question of waiting for the gap in the oncoming traffic before hitting the accelerator, overtaking and then pulling in. As a result the first 2k were done 30 seconds slower than anticipated, but maybe that was better than getting carried away and starting too quickly.

String quartet in a tunnel!

We were soon arriving at the 400m-long Devonshire Tunnel, which although lit was still quite dark. It didn’t take long to get through, back into the daylight and then into the longer Combe Down tunnel. This was 1.5k long, with piped music at a couple of points along the route – a string quartet, I think. It was slightly downhill, which made for a nice relaxing run, but also left me thinking about the 1.5k uphill drag still to come on the return journey. Exiting the tunnel and suddenly we were out in the woods, with fields down to the side – hard to think that we were so close to a sizable city. 500k later and it was time to do a U-turn around the race-marshal, before heading for home. It wasn’t long before I met the girl with the pushchair coming in the other direction, who was going at a very respectable pace..…respect!

Somehow going back seemed easier. Starting at the back began to pay off, as there was always someone in front to catch and overtake. Back at the finish they were handing out drinks, fruit, sweets and chocolate bars. A short bus ride back to the car park, and I was still back in Shrewton in time for lunch.

On the whole this was a very easy, hassle free event and it seemed well organized. Being pedantic, a few more loos would have been nice, I only saw marker boards for kilometers 1,2,5,8 & 9 which made judging the pace a bit hard and the official time keeping managed to add 15 seconds to my time that I can’t account for, but this was all small beer really. I can see some people might find 3.5k of running through tunnels a bit lacking when it comes to appreciating the scenery, but I enjoyed the novelty. Would I do it again? Oh yes; they are doing a number of similar events during the summer and I’ve already added May 14th to my diary.

Full details for upcoming events can be found here:
http://www.relishrunningraces.com/bath-two-tunnels-railway-running-races.php