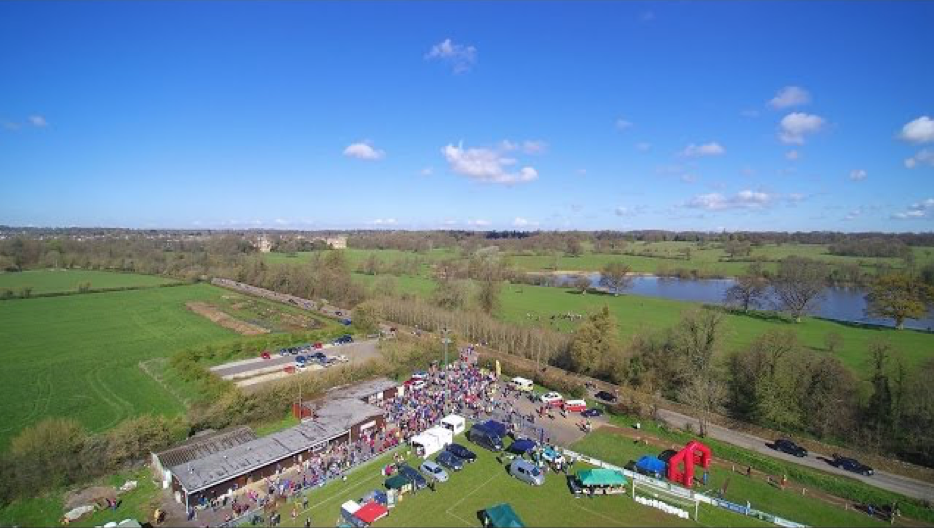 Whilst many of the club were celebrating their achievements from the previous days 5k by over-indulging at breakfast, I was heading to Corsham as the club’s lone representative in the St George’s Day 10k. The website described the race as being gently undulating with a cheeky little hill at the 9k mark. Curiously enough, Nick described one of the hills in the Salisbury 10k as being cheeky, so I’m wondering if this is a term in common usage in road race parlance…or is our esteemed chairman guilty of plagiarism?

After parking in one of the town car parks, I strolled through what looked like a very pretty town and on down Lacock Rd to the rugby club, which was hosting the event. On arrival, I was greeted by a very busy scene, with the pitch full or tents, stalls and people. First to catch my eye was a collection of old cars, so I spent a couple of minutes checking out a super-cool VW split screen van before strolling onto the pitch. Here, there were runners galore, with the yellow-and-gold-shirted runners from Avon Valley being matched by the blue-and-white harriers from Chippenham.

This was a welcome sight, as I had a particular yellow-and-gold runner I wanted to meet. After the childish escapades at Calne (see race review), I’d been looking forward to finding the guy we overtook and apologising. A quick look at the Calne results told me his name was Andrew, and a glance down the Corsham entry listings said he’d entered this race, so all that was left was to scrutinize the race numbers on the chest of every Avon Valley Runner I met until I found him. I should point out that I restricted this to the blokes, as spending too long scrutinizing ladies’ chests can get a chap into hot water, however innocent the intentions. Sadly, he was not to be seen, and a post-race check of the results indicated he hadn’t turned up. A pity, but maybe next time. Whatever, I was determined that I would run this race in a mature and respectful manner, with none of the childish last minute overtaking and certainly no raging war cries that have marred the club’s last outings.

The PA system was a bit of a mixed bag. If you were on the road side, then it was lovely and clear. However, on the pitch, where most people were milling, you couldn’t hear it. Thus it seems that the Salisbury 10m race is still the front-runner for the prestigious and highly-coveted Shrewton-RC-annual-best-PA-at-a-road-race-award: by all accounts, their PA was truly excellent.

The start was very well marshalled, with fast (sub-50 minute) racers at the front, followed by medium and then the relaxed runners at the back. We were led off by the convoy of old cars, although I couldn’t see them from my start position half way down the group of medium runners. The start flowed well and we’d soon covered the first kilometre … in 4 minutes 30 seconds. Eek, too fast, so slow down. The next 1K took 5 minutes and 15 seconds….way too slow. The gradient profile for kilometres 2 to 4 could fairy described as ‘gently undulating’, with the scenery being ‘1960s housing estate’. These couple of kilometres took over 10 minutes, still a bit on the slow side, so I hit the accelerator as we headed off out of town and into the country. Kilometres 5 and 6 took 9 minutes – way too fast again – at and this point I realised my race pace was, in common road race parlance, ‘all over the shop’. To be fair, the undulations probably had something to do with that.

The rest of the race was just a pleasure. It followed a circular route through the village of Neston where the landscape is awash with Cotswold stone architecture, with steep arch gables and mullioned windows aplenty, all set amongst the backdrop  of very pleasant Wiltshire countryside.

9K was soon reached and time to face the cheeky little hill, which actually turned out to very similar both in length and gradient to the stretch from the Royal Oak up to the bottom of Chalk Hill, so nothing we haven’t done already. After that, it was a question of turning right and then off back down Lacock Rd to the rugby club. Here, just oozing maturity and respectfulness, I turned onto the finish straight for the last 50m…only to be overtaken, one on each side, by a couple of forty-something-year-old children, who were sprinting hard for the finish. Good Grief…..you couldn’t make it up.

After that it was a question of picking up a goodie bag, which contained fruit, sweets, a bottle of the Box Steam Brewery Company’s Tunnel Vision ale and a T-Shirt. I did hear the odd complaint about lack of medals, but give me a bottle of real ale and a T-shirt any day.

This race was in its 35th year and was expanded this year to 1200 runners. It’s not hard to see why. The combination of slick organisation, an interesting route that sets a challenge without being scary and superb scenery are hard to beat. I’d definitely recommend it, but it is necessary to enter early. One thing I’d do differently next time is turn up half an hour earlier. I didn’t see much of the town centre, but got the impression it was a bit nice.

Rather than waste time reading the above waffle, why not get a real flavour of the event by checking out this short video?