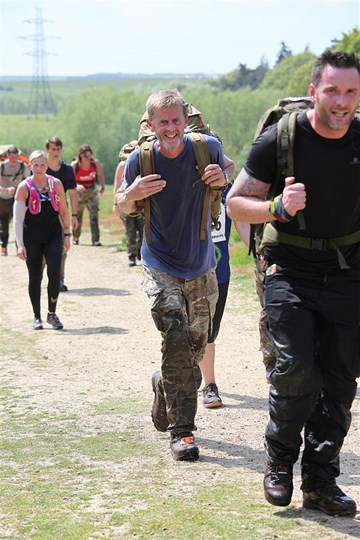 There was a massive turnout of over a thousand for this very well organised event. There are options to just run it, and dogs are allowed to take their owners too, but the tab is the real deal.

I arrived a bit late and in the rush forgot to take some of my stuff out. Even though at weigh-in my bergen was a couple of kilograms over it was by then too late to go back to my car and off-load as it was parked at some distance.

The weather took an unexpectedly sunny turn and it was humid so as the temperature soared it meant that everyone was sweating even during the warmup. There is absolutely no chance of missing the starting gun as the Royal Horse Artillery only do big noisy ones and as the report subsided the whole mass set off at an ambitious ten-minute mile pace running through Merville Barracks and then out in to woods and fields beyond. The heat continued and by three miles in it was obvious to a great number of us that maintaining target pace was going to be a real problem and the pack started thinning out quite quickly.

By the half-way point I had resigned myself to striding and shuffling hoping to make time up running later if only I could cool down and sort my pack out on my shoulders, none of which happened. Every time I tried to start running again my shoulders would give out and I completed the last half by just making sure I was moving my legs as fast as I could as I desperately tried to get some relief to my shoulders with some smashing encouragement from all the bemused Paras who were marshalling.

There are some fun obstacles to break things up a bit, a couple of water crossings around waist height and a stinking horrible bog to wade through but by the time I got there absolutely anything cold was welcome and it was over all too quickly. The course isn’t flat but there are no challenges with a mix of tarmac, gravel track, forest trail and open field to cross. The ground is mostly level and only once did I stumble. An unfortunate few did fall by the wayside though with heat being the main culprit as well as the odd overuse injury which must be gutting after all the preparation and training.

Well over a hundred made selection time of one hour and fifty minutes – a truly admirable achievement in that heat – and one ex Royal Marine even did it in a teddy bear costume! There is a long uphill approach to the finish line which for those still running must have a bit of Black Hawk Down feel to it. As you leave the pain behind a rank of blazered veterans are there to welcome you back into the land of normal, with a few words of congratulation and handing out the token medal. All of a sudden it is over and you find yourself lying on the ground too tired to get up, too tired to get to the wealth of food and drink stalls, and certainly too tired to get to the car-park with the damn pack.

I was happy to complete it with no time lost adjusting boots or tying laces and no blisters either (wearing two socks worked wonders) but my bergen was really painful on my shoulders with the weight seemingly sitting on the edge of the straps and cutting circulation. I really should have stuck with the day-pack I had trained with but half of the problem was also down to not having done enough strength work on my shoulders and insufficient training at full weight too if I am honest. My camelback failed me too so I ended up carrying two litres of water around for no good reason and like I needed that extra weight. Other than that my back was sore afterwards where it had rubbed raw in a couple of places but I only noticed that later in the day. My legs were fine but my shoulders will stay sore for quite a while yet. Still smiling having done it though, have an epic t-shirt to show for it and next time (did I mention next time?) will be better.

On the fundraising side I am over the moon. This was something I had wanted to do for some time and I received loads of encouragement from having gone well over my target and through all the messages received. It was well worth every groan to raise that money for Mind the Mental Health Charity and I would like to thank everyone for their generous donations on my fundraising webpage.