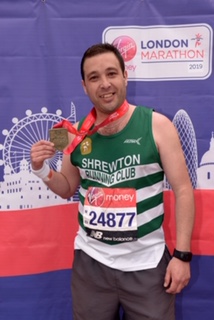 My earliest memory of the London marathon must have been around 1984, I recall watching it on the TV and the sight that become etched in my memory was the thousands of people running round the front of the Cutty Sark and over Tower Bridge. Every year thereafter my dad would try to tell us he’d been up early, completed the race and was sat watching everyone else whilst drinking his tea! My primary school PE teacher, Mr. Sampy also ran the London Marathon twice and I remember him proudly standing in front of us in morning assembly showing off his enormous medals….I think Mars were the event sponsors at the time.

Fast forward 32 years. My brother, Phil, who I know many of you have either met or heard me talk about on many occasions suggested I run Bath half marathon, I’d not really run before but he convinced me to sign up, urged on by the fact that my old man said I wouldn’t do it. I did it and the journey started, I entered lots of races and eventually joined a club, Shrewton Running Club.

I’ve been a member of the club since November 2017 and still remember the friendly welcome I received when I turned up for the first time one cold dark Wednesday night for a training run led by Karen, the first of many friendly faces I’d get to meet. I was impressed by the welcome I received and soon after I was a paid up UK Athletics Club member. Months later I learned that the club is awarded a guaranteed London Marathon Place each year, in 2018 I’d already entered the general ballot and had been rejected. The club held their own ballot and I was the lucky one of six who had entered the draw. To say I was thrilled was an understatement!

London was not my first marathon, I ran Manchester the previous year as well as completing a trail ultra marathon so I was aware what I was up against and knew I’d have to train hard if I was to finish within my target time of 4 hours 10 minutes…my current PB. Things didn’t quite go to plan and without making too many excuses, I didn’t train as much as I’d have liked owing to not realising how much time a second newborn child takes up! I was apprehensive but looking forward to the whole experience which began the Wednesday before the race when I took the train to London to visit the Virgin Money Marathon Expo and collect my race number. Beforehand I wasn’t really fussed on this event, I thought it would just be a big sales market but when I got there it surprised my how involved I already felt, there were many guest speakers giving advice on all things running, one of these being Mo Farrah, although it started getting busy when he was due on so I left after spending a good couple of hours there.

I travelled up on the Saturday with my wife Stacey and we spent a bit of time sight seeing and checking out some of the route getting back to the hotel in Ealing to sort my kit out and confirming that I was on the list for the complimentary transport that was to take me to the race village in the morning. Race day soon came around and I was on the coach at 5.30 to try and catch another hours sleep…yeah right! Everyone seemed to be buzzing and there seemed a strange sense of comraderie amongst everyone. Soon we arrived at Blackheath where the race village was situated, I was in Blue zone and it wasn’t long before I met up with a work colleague, Luke who was also lucky enough to have a club place, representing Littledown Harriers from Bournemouth.

It wasn’t long before we were all penned in for what seemed like hours, which was probably about 45 minutes before we were let slowly on our way on the well trodden 26.2 mile route around the streets of London. As I crossed the start line it struck me that this was it, this was what I’d dreamed of for the last two years since I got into running. There were thousands of people lining the streets and the noise was immense. Much like any other big race, the pace for the first few miles was dictated by everyone around me but it wasn’t long before I was in front of my target pace and I felt good, overtaking Ian Beale at 3 miles who, somehow must have started in front of me!

The first real ‘goosebump’ moment for me came about 6 and a half miles in, where I arrived at the aforementioned Cutty Sark, I’ve never heard so much noise. My thought at the time was that the volume would be off the DB meter if measured, I simply can’t describe how loud it was. I continued at a steady pace trying my best to take in the atmosphere whilst keeping one eye on my watch and it wasn’t long before I approached the next significant landmark, Tower Bridge at 12 and half miles. Once again I felt the emotion of what I was involved in, approaching the bridge the volume seemed to get louder as both sides were lined with all of the fantastic charities supporting their runners. As I was trying to take all this in I felt a tap on the shoulder to be greeted by a senior chap from Salisbury Athletics and Running Club who had qualified ‘good for age’ whom I’d met at the Chippenham 10 mile race only a week earlier….what were the chances?

Shortly after crossing tower bridge I headed out towards Greenwich seeing Stacey on the far side who had jostled amongst the many others who had turned out to support the runners. Greenwich seemed to be a little quieter and I found this part of the course quite a drag, I’m not a fan of modern fancy high rise buildings and I found it quite disorientating not being able to see the Thames. By this time, my pace had slowed and I started to find things getting more difficult. After what seemed like ages I approached a major psychological milestone, 20 miles, only a 10K race to go! I was now heading in the direction of the finish on the north side of the river and although I still had a way to go, mentally I was focused. I plodded on and seemed to be faring better than some of the people around me which selfishly made me feel good. Looking at my watch it was evident that I’d have to push hard to beat my time and realistically I didn’t have enough in the tank. I made the sensible decision to enjoy the moment.

As I ran past Westminster I once again felt the emotion of the event and as I turned onto the Mall, I was going to finish strong. I clocked the many cameras 100 metres or so away on the finish line and picked up my pace only to get severe cramp in my leg. Not the finish line photo I’d hoped for! I crossed the line in 4 hours, 16 minutes and 25 seconds which I was extremely happy with considering how much I’d neglected dedicated training. I collected my medal and after making my way back to find Stacey who had spent the day battling the crowds and we made our way back to the hotel.

Looking back on the event, I can honestly say I enjoyed every moment. Initially I was a bit miffed about having to go to London to collect my number but the Expo was well worth visiting and it was free. The organisation for such a large event was spot-on and the public support is something else. I’ve already entered next years general ballot and if I don’t get in I’m going to go up and watch everyone else. For anyone thinking of doing the London Marathon, don’t hesitate, you won’t regret it.

Thank you Shrewton Running Club for giving me the proud opportunity to represent the club.

PS, Ian Beale crossed finished in 6 hours, 45 minutes and 18 seconds, do you think he fibbed about his anticipated finish time? ?